Eco-minded consumers aren’t going to throw away their ideals when it comes to planning a wedding, and we’ve already seen the Portovert magazine provide ideas for green brides and grooms. Now Netherlands-based gift store niko niko is offering Throw & Grow event confetti, which grows into wildflowers after it’s been used.

Available in ten different colors, the confetti is made of biodegradable material embedded with wildflower seeds. When the confetti is thrown, it can be left to naturally disintegrate and if it lands on fertile soil then it may eventually grow into plantlife. The Throw & Grow confetti is currently available from the niko niko store as a Gift Box for EUR 11.95 or a Party Box for EUR 19.95.

Throw & Grow confetti enables those organizing weddings and other celebrations to forget about having to clean up while also benefitting the environment. How else can big events be made more green?

Bali’s Green School is an example of an educational institution putting an emphasis on nurturing the business skills of young people, but with numerous opportunities for entrepreneurs and startups now being offered through online avenues, Piggybackr is a new platform that aims to teach kids about how they can use crowdfunding to get their projects off the ground.

Given that many of the major funding sites such as Kickstarter and Indiegogo don’t allow campaigns run by minors, even young people who are aware of crowdfunding don’t have a chance to try it out for their own moneymaking ideas. Piggybackr is compliant with COPPA, the Children’s Online Privacy Protection Act in the US, by ensuring that users under 14 years old have the approval of a parent or guardian before launching a campaign. Children can also only send out invites to members of their family, school or society, enabling them to use Piggybackr as a place to learn about and experiment with crowdfunding before they’re old enough to launch more serious enterprises. Before users begin their campaign on the site they are offered hints and tips to help make their projects more effective, such as suggested backer incentives and email templates. When a task is completed, the site awards effort points and badges, so even if the projects don’t reach their target, children can still feel a sense of accomplishment.

For children who have known mobile and web devices all of their lives, it makes sense to open up the most current and exciting business possibilities to those willing to explore and learn, so they’re well equipped for the future. Are there other online business models that kids could engage with?

Crazy cool interactive graph of all musical genres, including samples for every example. Looks like it required a Herculean amount of labor. 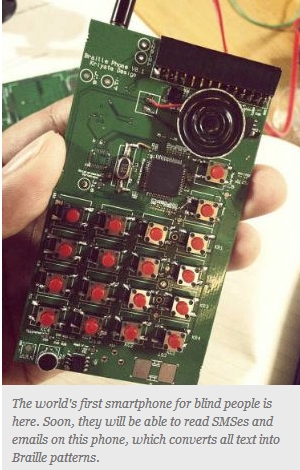 The world’s first smartphone for blind people is here. Soon, they will be able to read SMSes and emails on this phone, which converts all text into Braille patterns.

“We have created the world’s first Braille smartphone,” says its innovator, Sumit Dagar, whose company is being incubated at the Centre for Innovation Incubation and Entrepreneurship, located in IIM Ahmedabad campus. “This product is based on an innovative ‘touch screen’ which is capable of elevating and depressing the contents it receives to transform them into ‘touchable’ patterns,” he says.

Dagar, who is a post-graduate from the NationalInstitute of Design (NID), says he was motivated to develop the device when he realised that so far, technology was only serving the mainstream and ignoring the marginalised. He is collaborating with IIT Delhi on making the prototype, which is currently being tested at L V Prasad Eye Institute in Hyderabad.

“The response during the test has been immense. It comes out as a companion more than a phone to the user. We plan to do more advanced versions of the phone in the future,” Dagar adds.

Dagar started the project three years ago while studying interaction designing at NID. After working with a couple of companies, he gave up his job to concentrate on his technology, formed a team of six people and started his venture, Kriyate Design Solutions. Currently, the venture is being funded by Rolex Awards under its Young Laureates Programme, in which they select five people from across the world every two years and fund their projects.

· The smartphone uses Shape Memory Alloy technology, based on the concept that metals remember their original shapes, i.e. expand and contract to its original shape after use.

· The phone’s ‘screen’ has a grid of pins, which move up and down as per requirement. The grid has a Braille display, where pins come up to represent a character or letter.

· This screen will be capable of elevating and depressing the contents to form patterns in Braille.

via The Times of India